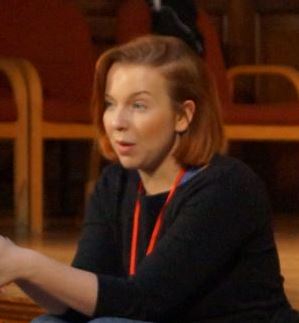 On Thursday 16th January, we were thrilled to welcome former Balshaw's student Rebecca Eastham to school. Rebecca ran several workshops on acting, musical theatre and acting for camera throughout the day. These were delivered to our GCSE drama and music students, along with some of our drama club students from the lower school.

After warming up their vocal chords and muscles with Rebecca, the students learnt about acting techniques for the stage and film and how they differ. They wrote and performed their own sketches based on phrases given to them and this was followed by a group musical theatre number based on the 9 to 5 song made famous by Dolly Parton, performed by the students along with a number of our members of staff!

A little bit about Rebecca….after leaving Balshaw's Rebecca went on to study The Professional Performance Programme at Runshaw College, then achieved a BA (Hons) in Musical Theatre at London's Mountview Academy of Theatre Arts; the same drama school our very own Mrs Bache attended! Since graduating Rebecca has worked in both theatre and television with recent roles in Emmerdale, Hollyoaks and Coronation Street. Rebecca will be on our screens again this year as she returns to Emmerdale in February.

A huge thank you to Rebecca for coming back to school. All the students had a thoroughly wonderful day filled with acting, singing and creativity. Learning new skills and applying them in a practical way!

A selection of photographs from the day can be seen below: